Following the decline in compliance with the safety measures against the COVID-19 pandemic, the Nigeria Centre for Disease Control has called on security agencies to work alongside religious bodies to enforce the safety protocols during the festive season. 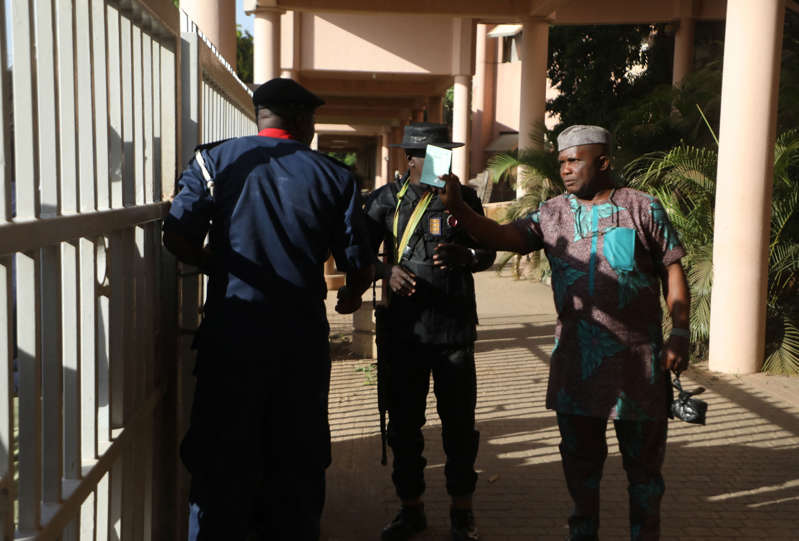 © KOLA SULAIMON/AFP via Getty Images FILE – A worker shows to police officers a vaccine card to identify with compliance to compulsory vaccination before being allowed into offices at the State Secretariat in Abuja, Nigeria, on December 1, 2021.

The call by the NCDC was contained in a directive obtained by Saturday PUNCH in Abuja on Friday.

This was as the centre disclosed during a virtual interactive session with journalists in Abuja on Friday that 45 cases of the omicron variant of the COVID-19 virus had so far been detected in the country. It added that the first Omicron case was detected in a sample on November 9, 2021.

The variant, which was first detected in South Africa and Botswana, has spread to other countries.

The NCDC, in a fresh directive signed by its Director-General, Dr Ifedayo Adetifa, said, “The Federal Government of Nigeria, through the Presidential Steering Committee on COVID-19, the Federal Ministry of Health as well as the NCDC and its partners are intensifying communication efforts to remind Nigerians of the risk we face and the need to take collective responsibility to reduce the transmission of the virus.

“Security agencies are also encouraged to ensure consistency of the messages to the community, as generated by relevant authorities as well as identify the right channels of communication. These include the Federal Ministry of Health, state Ministries of Health and the NCDC.

“Information and feedback should also be shared with relevant authorities to influence decision-making and strategies. We urge security personnel to be aware of the high risk of spread of COVID-19 and the great risk of exposure occasioned by their jobs and to ensure that they are fully vaccinated, including booster doses.”

The NCDC, a few days ago, declared that Nigeria had slipped into a fourth wave of the pandemic following a 500 per cent increase in cases in the past two weeks.

The PUNCH had reported that the Boss Mustapha-led Presidential Steering Committee announced a limit on religious gatherings and threatened to introduce more restrictions following an increase in cases.

The directive partly read, “Since the onset of the pandemic, security agencies have played a critical role in the national and sub-national response, most critically in supporting the implementation of public health policies as instituted by the Federal Government of Nigeria. This includes the COVID-19 Health Protection Regulations 2021 which makes provision for the enforcement of the implementation of existing guidelines on mass gathering and adherence to non-pharmaceutical interventions across the 36 states and the Federal Capital Territory to mitigate the impact of COVID-19 in the country.

“There is generally poor compliance with the NPIs across the country and this has continued even into this Yuletide, which, in combination with low coverage of COVID-19 vaccination, is a recipe for a big surge in cases and admission to treatment centres.

“As celebrations for Christmas and the New Year commence, the NCDC urges security personnel to work with heads of communities, associations, institutions, religious bodies and other key stakeholders to ensure effective implementation of existing public health policies and regulations. The virus that causes COVID-19 including the Omicron variant, which is rapidly spreading across the globe and within Nigeria, is more likely to spread when people gather and do not adhere to COVID-19 preventive measures.”

The NCDC Director-General said the Omicron and Delta variants were responsible for the recent surge in cases.

Speaking during the virtual interactive session, Adetifa noted that the country was experiencing community transmission of the variant.

Adetifa noted that Omicron had raised the number of confirmed cases in the country to 500 per cent, adding that the variant had become the dominant variant in the country.

The NCDC boss said the country had identified 39 additional cases of the Omicron variant, bringing the total number of confirmed infections to 45.

He said, “The 39 additional detected Omicron variants were people without travel history, rather they were in-country, which suggested that the country is already experiencing a community transmission.

Adetifa however stressed that it was important for Nigerians to maintain physical distancing and avoid contact with anyone showing symptoms of respiratory illness.

“We are counting on you to #CelebrateResponsibly and #TakeResponsibility to keep yourself and your loved ones safe from COVID-19,” he urged.

The Presidential Steering Committee on Thursday announced restrictions on religious gatherings, limiting indoor gatherings to 50 per cent capacity while adding that more restrictions might be introduced following an increase in cases.

Adetifa said as of Friday, Nigeria had not recorded any death from the Omicron variant of COVID-19.

Meanwhile, following the declaration of the fourth wave of the pandemic, checks by one of our correspondents have revealed an increase in cases on admission as 33 states and the Federal Capital Territory have continued to witness a surge in the number of cases.

The NCDC, on its website, indicated that the number of admission cases has continued to rise.

According to the information on NCDC’s website on November 24, 2021, only 3,828 cases were on admission.

When contacted by one of our correspondents, the Special Assistant to the Minister of the FCT on Health and Hospital Management, Dr Ejike Orji, said there were enough provisions to meet oxygen demands following the rise in cases on admission.

Similarly, the Ekiti State Commissioner for Health, Dr Oyebanji Filani, said on Friday that the state government had stepped up vaccination, which was being undertaken in public places and strategic locations as part of efforts to increase vaccination coverage.

Filani said, “Our goal is to make sure that we vaccinate as many people as possible; we have vaccinated a little over 400,000 persons. We will continue to increase on that.

“Again, we have expanded our awareness and advocacy. We have increased the frequency of our messages on the radio and television informing people that in this period, particularly the Yuletide season, that people should celebrate responsibly and be mindful of how they do things.

“In addition to vaccination, we are telling people to embrace preventive strategies to curtail the spread of COVID-19. People should use face masks, wash their hands frequently, use alcohol-based sanitisers and maintain social distancing.”

The Abia State Commissioner for Health, Dr Joe Osuji, told one of our correspondents in Umuahia that the state had been doing everything through sensitisation and awareness, asking people to come for vaccination and testing to curb the pandemic.

Osuji added, “The state’s isolation centres are still open, including the one at Amachara General Hospital, Umuahia.”

On its part, the Oyo State Government said it had started mass vaccination of residents of the state against COVID-19 amid the increasing number of cases.

Governor Seyi Makinde inaugurated the exercise on Wednesday at Alesinloye Market together with his deputy, Rauf Olaniyan, and other top government officials in the state.

Makinde, who spoke with one of our correspondents through his media aide, Taiwo Adisa, said the exercise was to increase the number of vaccinated persons and curb the spread of the virus.

“This is meant to ensure that people at the grass roots level get the vaccines. As that is going on, people are turning up for testing and vaccination at different points. The isolation centres have never been closed, even when it looked as if the pandemic had died down. The clinics have been taking good care of whoever tests positive for the virus,” he added.

In Osun State, the state government said nine patients were in its COVID-19 isolation centre receiving treatment as of Friday.

The Special Adviser on Public Health to the governor, Dr Siji Olamiju, on Friday said the government had not closed its isolation centres and had continued testing suspected cases.

Olamiju said, “Our isolation centres are not under closure and people have been coming for testing regularly. We have never stopped testing. Regarding the measure to curtail spread, we are on it and we are also appealing to our people to take heed of COVID-19 protocols. They should avoid mass gathering; people should take the vaccine and use a sanitiser where hand washing is not possible.”