Vice President Yemi Osinbajo has said the world and Nigeria are presently at crossroads.

He said this on Tuesday at the launch of the International Centre for Yoruba Arts and Culture at the University of Ibadan. 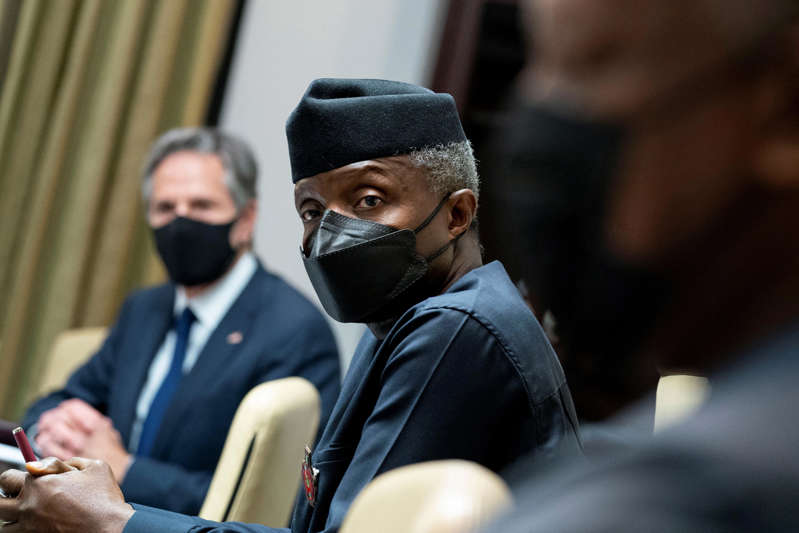 Nigerian Vice President Yemi Osinbajo (C) is seen during his meeting with US Secretary of State Antony Blinken (L) at the Aso Rock Presidential Villa in Abuja, Nigeria, on November 18, 2021. – Blinken is on a five day trip to Kenya, Nigeria, and Senegal. (Photo by Andrew Harnik / POOL / AFP) (Photo by ANDREW HARNIK/POOL/AFP via Getty Images)

The Vice President, in his address at the event, said COVID-19 and climate change were already disrupting life but said lessons to cope with these could be learnt from the culture of the people.

He said, “Culture is not just about the past; and it is neither static nor immutable it is constantly creating and recreating. Consequently, progress is not merely determined by fidelity to tradition but by our capacity for invention and reinvention.

“And this point is more relevant now than ever before as the world itself and our nation stand at crossroads. The future of mankind is at an inflexion point with COVID-19 and climate change already disrupting life as we know it. While the Fourth Industrial Revolution requires us to adapt to technological innovation changing at lightning speed.

“To cope well, we must draw strength from our cultural capital – the wealth of tangible and intangible knowledge that emanates from a society’s core and enables it to cope with change.”

Osinbajo said the Yoruba World Centre would serve not just as a place of memory but as a place that inspires and fires the collective imagination as well as ideas and thought of the people.

He urged those present at the event to join the movement agitating for the return of the artefacts looted from Yorubaland by the colonial masters.

He said the proposed centre would give context and depth to the understanding of the past of the Yoruba, their place and role in the present and hopefully, their preparation for the future.

He added, “Today, young Nigerian artistes are using local sounds to create a global popular culture. Is there something to be learned here? Additionally, the centre should offer a destination for missions of discovery by the very many Africans in Diaspora who trace their origins to the Yoruba people and promote closer links between the Yoruba people in the homeland and their kin in the diaspora .

“But more importantly, provide a crucial pillar in the global attempt to build social and economic bridges between peoples of African descent everywhere in our world.

“And while we are at it, you must join in the global movement to champion the return of artefacts that were plundered, looted or illegally taken away from these shores. Indeed, the centre could serve as a home for such returned items where the immediate provenance or circumstances in which the items were taken is not clear or not known, “ he added.

The Chairman of the South-West Governors Forum, Rotimi Akeredolu, who was represented by his deputy, Lucky Ayedatiwa, commended Dayo Alao for his visionary efforts to ensure that the centre takes off.

He urged Yoruba people both at home and in the Diaspora to join in building what he described as a place of remarkable history.