Bangladesh, Dec. 19 — Foreign Minister Dr AK Abdul Momen has questioned the position of the United States as it talks about humanity pointing out that the country has been sheltering convicted killer Rashed Chowdhury instead of handing him over to Bangladesh.

He said the US talks about “law and humanity” but they sheltered the killer (Rashed Chowdhury) of Father of the Nation Bangabandhu Sheikh Mujibur Rahman which is not justified. 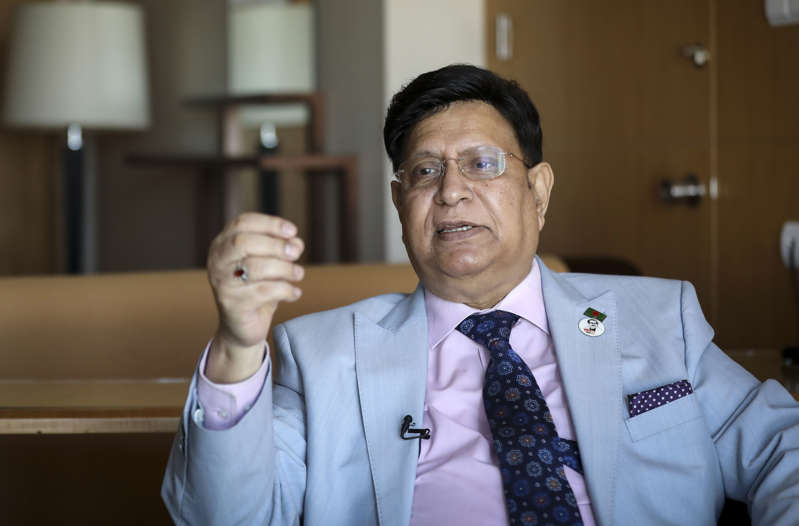 © 2020 Anadolu Agency FILE – ANKARA, TURKEY – SEPTEMBER 17: Bangladeshi Foreign Minister AK Abdul Momen speaks during an inclusive interview in Ankara during his visit to Turkey on September 17, 2020. Speaking exclusively to Anadolu Agency, Bangladesh’s FM Momen addresses variety of topics from bilateral relations to Rohingya issue. (Photo by Hakan Nural/Anadolu Agency via Getty Images)The Foreign Minister made the remarks while talking to reporters after an event at Bangabandhu International Conference Centre in the city on Saturday.

Asked about any counter-action on the US, Dr Momen said they are not thinking in such a way and that is not the mentality of Bangladesh.

Dr Momen said they are discussing internally about the next course of action. “We’ll sit together soon to decide to move ahead.”

He said the Rabid Action Battalion (RAB) has been successful in addressing human trafficking, crime and drug trafficking in the country.

Earlier, Dr Momen, during a telephone conversation, conveyed to US Secretary of State Antony J Blinken that the people of Bangladesh did neither accept nor like the designated sanctions imposed on the Rapid Action Battalion (RAB) and its some of the present and former officials.

Read: Bangladesh to continue urging US to send back killer Rashed Chy: Shahriar

“I shared the spirit of the country’s people. They (people of Bangladesh) didn’t accept it. They didn’t like it,” he told reporters at a media briefing at Foreign Service Academy recently while responding to a question on his recent telephone conversation with the US Secretary of State.

“The two leaders discussed the importance of human rights and agreed to strengthen bilateral cooperation and address shared global challenges,” said the Spokesperson.

Dr Momen explained why the people of the country did not accept it, noting that the two countries have around 50 years of trusted friendship.

Food adulteration offences in Nepal rise even during lockdown Kathmandu PostAlarm over Pakistan currency’s devaluation in DubaiKARACHI: Hawala operators in Dubai are selling the dollar for Rs187-89 (at a premium of three to four per cent compared to rates in Pakistan), resulting in a decline in the official remittances from Pakistanis working in the United Arab Emirates. In Pakistan, the dollar was trading at around Rs181 in the open market compared to Rs178 in the inter-b… DawnPakistan Supreme Court ruling to help retired judges join Election…ISLAMABAD: In a rare exercise of its power to “read in” the law, the Supreme Court has done away with constitutional bar on the appointment of retired judges as members of the Election Commission of Pakistan (ECP) before completion of two years after their retirement. The court in a detailed order on a petition challenging the Sindh High Court’s ju… DawnPlan to table US compact in Nepal Parliament set to charge up politics Kathmandu Post

Nepal vaccination rate slows down Kathmandu PostPakistan army chief urges ‘sincere’ efforts to avert catastrophe in… The News InternationalPower Cell DG: Bangladesh trying to import 500MW hydro-power from Nepal United News of Bangladesh (UNB)Hong Kong elite picks new ‘patriots only’ legislatureHong Kong’s political elite began voting to pick new city lawmakers on Sunday under Beijing’s “patriots only” rules that drastically reduce the number of directly elected seats and control who can run for office. All candidates have been vetted for their patriotism and political loyalty to China and only 20 of the 90 legislature seats will be directly elected. AFPRussian military planes evacuate 200 people from AfghanistanMOSCOW (AP) — Russian military transport planes on Saturday delivered a shipment of humanitarian supplies to Afghanistan and flew back 200 Russians, Afghan students and others, the defense ministry said. The ministry said that three Il-76 cargo planes will make stopovers in Tajikistan and Kyrgyzstan before flying to Moscow. It said the planes were carrying citizens of Russia and Kyrgyzstan who wanted to leave Afghanistan, and Afghan students… Associated PressGas explosion kills at least 10 in Pakistan’s Karachi Al JazeeraPeople pressure governments worldwide to act on inflation Associated PressGlobal concerns rise over Omicron The IndependentReclusive Laos to re-open to foreign travellersLaos has announced plans to partially re-open to foreign travellers in the new year, throwing a lifeline to the tourism industry after borders were sealed for more than 18 months to keep out Covid. Fully vaccinated visitors on pre-booked tours will be able to enter from January 1 and visit the capital Vientiane, eco-tourism hotspot Vang Vieng and UNESCO World Heritage-listed Luang Prabang, state media reported Friday. Further destinations will… AFPTaliban resumes issuing passportsAfghanistan’s Taliban authorities said Saturday they will resume issuing passports in Kabul, giving hope to citizens who feel threatened living under the Islamists’ rule. Thousands of Afghans have also applied for new travel documents to escape a growing economic and humanitarian crisis described by the UN as an “avalanche of hunger”. The authoriti… AFPHong Kong accuses activists of inciting poll boycott AFPJapan business lobbyist backs Myanmar coup, urges investment ReutersUS Senate confirms Emanuel as envoy to Japan AFPPakistan rallies OIC for Afghan aid Associated PressFitch downgrades Sri Lanka as default fears mount AFPTwo positive COVID tests on trip with Blinken were not disclosed CBS NewsFeedback