Lawyer: We have CCTV evidence of how Kanu was abducted from Kenya

Details of a N5 billion suit filed by the leader of the Indigenous People of Biafra (IPOB) against the Kenyan government have hinted on the torture the IPOB leader allegedly went through in the custody of security agents in the East African country. 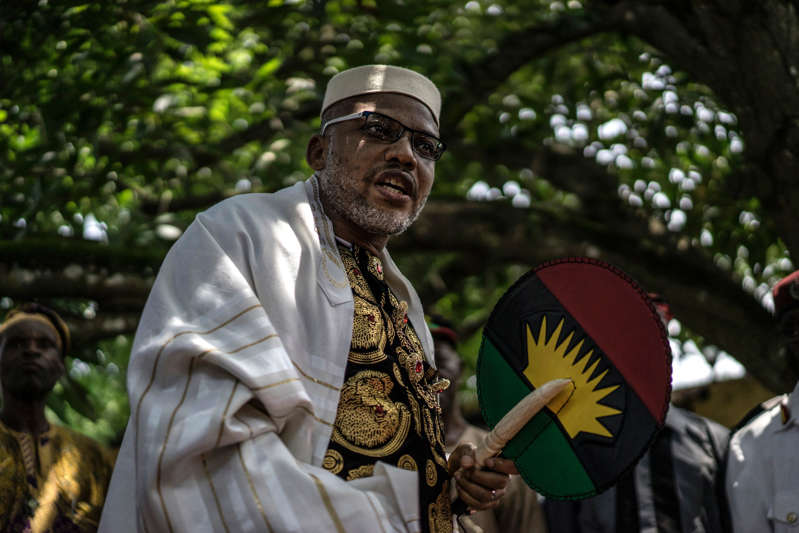 © MARCO LONGARI/AFP via Getty Images FILE – Political activist and leader of the Indigenous People of Biafra (IPOB) movement, Nnamdi Kanu, wears a Jewish prayer shawl as he walks in his garden at his house in Umuahia, southeast Nigeria, on May 26, 2017.

Nnamdi Kanu’s lawyer, George Wajackoyah, claimed in an audio tape that he had CCTV and other evidence of how his client was abducted in Nairobi, Kenyan capital by the Muhammadu Buhari government.

“We have copies of his passport and a stamp that he was indeed in Kenya. We also have evidence he was in his residence on a particular day.

“We also have material proof that he was at the airport on a particular day to meet a friend and there he was arrested.

“Definitely, he was kidnapped,” Wajackoyah said.

The Kenyan government had strongly denied involvement in the process that led to the arrest and repatriation of Kanu back to Nigeria, with its High Commissioner to Nigeria, Wilfred Machage, describing the claim that Kanu was arrested in the East African country as “deliberately concocted to fuel antagonistic feelings in the minds of certain sections of the Nigerian people against the people of Kenya.”

The high point of Kanu’s ugly experience, according to the law suit, was that he got his body smeared with his own urine and faeces because the security agents allegedly denied him permission to use the toilet.

The suit, which was filed in Umuahia, Abia State by Kanu’s counsel Aloy Ejimakor on September 7, revealed that Kanu was beaten severely until he fainted and was revived with cold water.

The suit is seeking to enforce Kanu’s right to life, dignity of the human person, personal liberty and fair hearing.

The affidavit in support of the originating motion, which was done by Kanu’s brother, Emmanuel, stated: “That the facts and violations deposed to in this affidavit started at the applicant’s residence in Isiama Afaraukwu Ibeku, Umuahia North Local Government Area of Abia State; to wit; the military invasion of the applicant in September 2017 by a combined team of Ohafia-based 14 Brigade of the Nigerian Army, the Abia State Command of Nigeria Police Force and the Abia State Directorate of the State Security Service.”